‘Bangladesh Manabadhikar Bastobayan Sangstha’ (in English – Bangladesh Society for the Enforcement of Human Rights – BSEHR) is the pioneer and leading organization in Bangladesh, established on the 10th of December, 1977, to work on establishing and protecting Human Rights of the poor and vulnerable women, men and children in Bangladesh. This organization believes that human-rights are the basic elements of human development as well as of the social and economic development of a country. Manabadhikar recognizes the fact that these rights have been incorporated into the Constitution as fundamental principles of state policy and fundamental rights of all persons. Most codified laws are also in force to protect the rights of the citizens and the persons living in Bangladesh but at the same time, it is convinced that due to the lack of proper enforcement these laws have been rendered ineffectual. The root causes of the violation of human rights are the lack of knowledge and the lack of voice of the people and poor governance in the government agencies. For total development of the country, it is essential that endeavors are taken to instill the respect and knowledge of the laws, rights and obligations amongst the public. This is possible through the enforcement and promotion of Human Rights and as such Manabadhikar sees itself as a force and partner of choice in this movement and dedicates itself to promoting the administration of justice, the Rule of Law and secures legal guarantees for the protection of the basic Human Rights of persons in Bangladesh. To achieve the objectives, the Bangladesh Manabadhikar Bastabayan Sangstha (Manabadhikar)has a membership of 7,682 voluntary activists in its 358 Chapters located at City Corporations, districts and sub-district level. This makes Manabadhikar an effective tool in guaranteeing access to justice for all irrespective of gender, class, ethnicity etc.

Vision of Manabadhikar
To create an enabling, conducive and trustworthy mechanism for the promotion and protection of human rights for the poor and vulnerable people

Mission:
Manabadhikar seeks to realize the promotion and protection of human rights through awareness education, investigation, legal support services, research and policy advocacy on the various instance of violence, policies and infringement of rights, abuse of power negligent exercise of authorities which result in deprivation, oppression and injustices as well as violation of human rights

Integrity:
We act consisting with Manabadhikar’s mission, be honest and transparent in what we do and say, and accept responsibility for our collective and individual actions

Respect:
Respect for the dignity and worth of every human being. We affirm the dignity, potential and contribution of participant, donors, partners and staff

Excellence:
We constantly challenge ourselves to higher levels of performance to achieve grater impacts

Commitment to services:
We work together effectively to serve the larger community.

Social Accountability
Developing a functional model that can be replicated throughout the country in order to promote and protect human rights as well to improve the access to justice.

Constituency Building
Development of constituency within the frame work/ areas

Reformation
Organizational restructuring to cope with and address new challenges

Policy Level Management
Manabadhikar has necessary policy-procedures and practices to ran the organization effective and efficiently which are:

Working Areas
We cover 59 districts out of 64 districts in the country through its 358 chapters at districts and sub-district level. These areas are covered by two types of personnel i.e. paid staff and non-paid volunteers.

Human Resources
At present we have 118 full time paid staff in 7 districts and 7564 non-paid volunteers in 358 chapters all over the country.

List of projects implemented by the organization during last 5 years 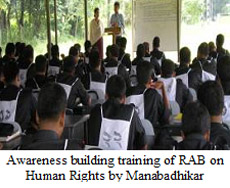 One of the root causes of the violation of human rights is the lack of knowledge and the lack of voice of the people and poor governance in the government agencies. Awareness education to the target people both of service receivers and service providers including law enforcement agencies is one of the potential programs of the organization on calming and protection of human rights and social dignity. Various strategies and methods are being used in this awareness education e.g. training, poster, leaflet, bill-board, TV program, medial campaigning folk song, street drama etc. In this connection, we have a Training and Research Cell to develop appropriate and effective strategies for awareness education

For reach more people as a part of awareness building, the Organize undertakes many activities with electronic media. Some of awareness program using TV Channels are: 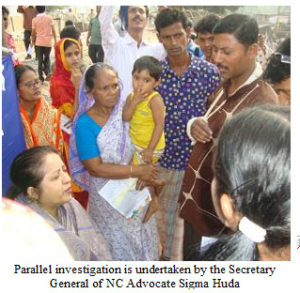 On the basis noticed received through Thana monitoring, outsourcers’ information and newspapers the organization conducts parallel investigate the cases important on the ground of human rights. Findings of parallel investigations conducted in selected cases are documented and referred to the relevant authority as appropriate. And at the same time provide further assistance needs for the particular case (including legal aid, mediation, appropriate legal & judicial steps, procuring evidence & witnesses etc.). Further, the fact-findings mission on national sensitive and public interest cases for evidences to share with wider audience with the aims to develop 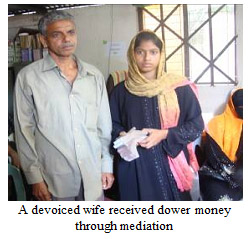 There are many issues / disputes with the families in the communities could be solved through arbitration / mediation. Many of the poor helpless women, children and men victims don’t get proper justice due to lack of understanding what to do. Very often they are also deprived by the local traditional leaders. To assist to the victims of family / social conflicts this organization provides mediation / ambition support for proper solution in legal framework. We have mediation facilities at every chapter of 312 chapters along with 7 mediation centre in big cities of the country. During the period of 2010-11 we facilitated 7,488 successful mediation across the country.

Legal Aid Support to victims to access to justice is one of the main programs of Manabadhikar. Access to justice is not always easy to the poor and vulnerable people in our country. In many cases the poor and helpless victims do not feel encourage to go to court for justice, rather s/he accept injustice / unfair settlement made by the local influence people. This organization has more then 2500 lawyers all over the country to provide legal aid support. Some of sensitive legal battles are (from Manabadhikar archive) 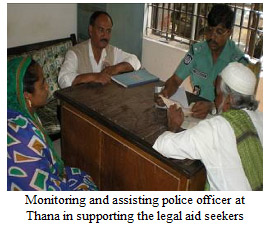 Victims come to Thana to file FIR / GD or case with the aims to get justice as well as to punish the culprits, but very often their FIR / GD or cases don’t lodge / file appropriately dueto lack of adequate knowledge or due to negligence of the assigned police officers. This practice is more acute in the case of poor and helpless women, children and men. At a result, the cases become dismiss or jeopardize in the trial a court. To establish a mechanism at Police Station to provide support the victims professionally and lodge their allegations properly and correctly for justice, the organization has an activity named ‘On-spot monitoring’ to monitor and support of the Thaana, court heat, hospital since 2004. At present we monitoring 30 Thanes, 6 Hospitals and 6 . Court heat in Dhaka, Chittagong, Chula, Nature, Tang ail and Jhenaigh through SAHR Project 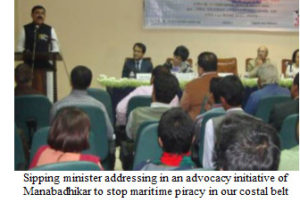 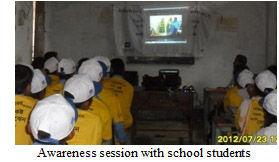 To promote and protect human rights in a sustainable more it needs to change mind set of the community people. The young generation is the tomorrow’s leader. They, especially the students have potential influential over her / his family. Family is the primary unit of a community. If the rights and dignity of women and girl are recognized and practiced in families, then this will lead the whole community to do same.

With this aims to develop future leader and to influence family as well as community, this organization select the “student to family approach”. Under this approach we have an activity of orientation and motivate students of colleges, schools and madrasha. In last two years we oriented more 10,000 students and have target through providing human rights literacy, awareness sessions / classes and different events with the signing MOU (memorandum of understanding) with the selected institutions 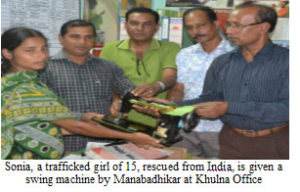 Providing lifesaving medicate to critically insured survivors and small assets transfer to extremely vulnerable survivors for mainstreaming in the society is one of our sub-activities. Sometimes some women become as extremely vulnerable losing all income earning means of living. In those cases they poorly need any way for living.

In these cases the organization supports them with small assets for their survival that will lead them to normal life and mainstream in the society.

Human trafficking is a serious human rights violation. We are always active in country and abroad to combat trafficking in person. Some recent cases handled as bellows:

10. Public Interest Writ
This organization filed more then hundred writ petitions and 1261 criminal cases in favor of public interest. Some example is given below:

Writ Petition # 1992/2001, Arup Kumar Vs Bangladesh Government: 83 School’s teacher at didn’t get their salary for long years. The Court order government to give salary regularly and the order executed accordingly

Writ Petion# 247/2004, Manabadhikar Vs Bangladesh Government: Akale, a girl of 15, chained at legs in Hospital. The Akale rescued and the hospital authority punished.

Women and Child Case # 08 (01) 99 Ms. Bulbuli Vs. Shima: Custody of minor girl in without prior approval of guardian. Released and punished accused

Writ Petition # 2202/2008, Marufa Akter Vs Government: HSC Examination Related. She got change to sit for examination

11. Local Platform / Chapters strengthening
Local platforms are the basic strength of the organization to protect and to promote human rights across the country. To address the human rights issues all over the country, the Bangladesh Manabadhikar Bastabayan Sangstha has a membership of 7,682 voluntary activists in its 358 Chapters located at City Corporations, districts and sub-district level. This makes Manabadhikar an effective tool in guaranteeing access to justice for all irrespective of gender, class, ethnicity etc. To strengthen and development of Chapters the organization organize National Convention in every two year with about 1500 (fifteen hundred) delegates from the chapters. The members of National Committee also nominated / elected by the delegates of the National Convention